Acne bacteria and its role in development of acne

New insights on the dynamic skin microbiome and commensalism, rather than static colonizers, have been prevailing scientific research and precedent notion of bacterial colonization as a primary etiology of acne vulgaris outlives its pragmatism. Skin surfaces in the acne prone areas, face, shoulders, upper chest and back, are harbored by Staphylococcus epidermidis, S. epidermidis, and anaerobic gram positive Cutibacterium acnes, C. acnes, previously known as Propionibacterium acnes.

On the other hand skin colonization with staphyloccocus aureus, by some studies, have been implicated in pathogenesis of acne vulgaris. In adolescence, the number of bacteria on the skin surface increases while sebaceous areas are primarily resided by C. acnes whose elimination targeted by most acne conventional therapeutics for acne.

Strains of C. acnes and dysbiosis of the skin microbiome

Next generation sequencing of acne bacteria, NGS, has helped distinguish six strains of C. acnes, IA1, IA2, IB, IC, II and III, with distinct microbiology and host interacting qualities. Genetically analyzed, certain strains were suggested possessing more virulence factors and perceived as pathological than others, found to be associated with healthy states. Studies suggest that bacteria have nothing to do with the initiation of comedogenesis. However, acne bacteria, in particular, may in some situations be important in the initiation of inflammation especially in cysts.

Over the past decade, role of C. acnes in acne vulgaris has been largely debated and certain novel insights outpower precedent thinking with the skin microbiome dysbiosis gaining more traction. Proof for C. acnes colonization in acne vulgaris found itself in a mire of equivocality while elimination of the bacteria resulted in utter alleviation of acne lesions. Loss of diversity in strains of C. acnes takes a more favorable stance and appears more promising but still seeks more substantiation.

C. acnes strains are also quite likely involved in a perpetuation of inflammation once established. Severity of acne however does not relates to the number of bacteria on the skin surface or in the sebaceous ducts. Many topical acne treatments target bacterial control in order to subsidize acne and comedones, among them benzoyl peroxide. Long chained fatty acids have drawn attention as potential therapeutic agents for their antimicorbial activity against common skin pathogens which cause acne. Gamma linolenic acid (GLA; c18:3n-6), eicosapentaenoic acid (EPA; c20;5n-3), docosahexaenoic acid (DHA; c22:6n-3) have been subject of study for their antimicrobial activity and proved to work in synergy with skin antimicorbial protiens and benzoyl peroxide in combating staphyloccocus species and p.acnes.

C. acnes is equipped with several lipolytic enzymes which can alter epidermal milieu, not always harmlessly. Two lipases has been identified, triacylglycerol lipase GehA and GehB, capable of hydrolysing triglycerides into free fatty acids which may contribute to inflammation and comedogenesis. However, sebum free fatty acids have been found to be protective by enhancing expression of human beta denfensin, hBD-2 and hBD-4, in sebocytes. Moreover, several glycolipid processing enzymes, putative endoglycoceramidases, identified in C. acnes, are accounted for catalyzing ceramides and glycosphingolipids for provision of carbohydrate as energy source for the bacteria.

Three main phylotypes of C. acnes have been identified, I, II and III and type I is subdivided into IA1, IA2, IB and IC. Type IA and some subgroups of IB has been found in most moderate to severe acne lesions while type II and III are mostly associated with healthy skin. Lipase of IA strains was reported architecturally truncated and distinguished in virulence and quantitative activity while lipase amid other strains was suggested structurally conserved. Increased lipase activity leads to further generation of free fatty acids from triglycerides and lysophosphatidyl choline, advancing to inflammatory processes. These findings further open up the tantalizing contingency of plastic cutaneous microflora that one strain outpopulates another when sebaceous or inflammatory markers are lured to transformation.

Characteristically, C. acnes appears to form biofilms, generated by a network of polysacharide to adhere to follicular keratinocytes, which confirms them not just colonization and comedogenicity but contumacy to antimicrobial agents. This glycocalyx network substantiates in that it can alter the course of acne disease and its therapeutic approaches by inducing keratinocytes adhesiveness to give rise to comedones and by upregulation of beta-1 ntegrins and impacting keratinocytes differentiation.

Among other metabolites of C. acnes are short-chain fatty acids, SCFAs, propionate, acetate, butyrate and valerate with salutary as well as deleterious impacts on the host. SCFAs can limit growth of staphylococcus aureus on the skin by acidification of the skin and compromising an ideal abode for growth of S. aureus, however, SCFAs perniciousness is not limited to the skin pathogens, and it risks health of epidermal barrier function.

Toll like receptors, TLR-2, and matrix metaloproteinases have been identified as targets of acne bacteria to breed inflammation and incite cytokines. Activation of TLR-2 on keratinocytes by C. acnes biofilms followed by induction of IL-6, IL-8 and TNF-α has been reported to be under regulation by a microRNA, miR-146a.

Nonetheless, acne bacteria may resort to other means to embody its pathogenecity as in perifollicular dermis induces monocytes to release IL-1β by activation of NLRp3 inflammasomes, a process which is potassium-ion efflux and caspase-1 dependent. While IL-1α was found in open comedones and instigate follicular hyperkeratinization, IL-1β can provoke sebocytes to deliver proinflammatory cytokines, IL-6 and IL-8 and further foment inflammation.

S. epidermidis, a skin commensal, pays tribute to cutaneous anti-inflammatory processes by challenging C. acnes procytokinetic menaces, induced by provocation of keratinocytes to release IL-6 and TNF-α via inhibition of TLR2. Another mechanism S. epidermidis is resorted to appears to be glycerol fermentation and generation of intermediates such as succinic acid to compromise amenities of its cohabitation with C. acnes.

Moreover, it was shown that intralesional or topical application of succinic acid limit growth of acne bacteria. Probiotics with S. epidermidis may be therapeutically employed against C. acnes in acne vulgaris as suggested by some studies which corroborate role of short-chain fatty acids, bred by the bacteria, to confine pilosebaceous inflammation.

Saccharomyces Cerevisiae, S. cerevisiae, has substantiated a role in pathogenesis of number of cutaneous diseases and its significance turns into a fulcrum for numerous dermatological studies based on its immunomodulatory characteristics. Amid several, a link between this eucaryotic cell, psoriasis and its treatment have been found, denoting decline or absence of S. cerervisiae in psoriatic patients. In addition, antibodies against gp200, a structural glycoprotein in S. cerevisiae, has been delineated in patients with atopic dermatitis. While another study proposes an association between consumption of S. cerevisiae fermented product and de-escalation of inflammation in mice model of atopic dermatitis. β-glucans, a glucose polymer with glycosidic bonds and a component of S. cerevisiae cell wall, have been demonstrated to enhance tissue granulation and reepithelialization and a purported role in wound healingby activation of Dectin-1 receptor.

A repertoire of bioactives of intestinal tract origin, generated by a distinguished collection of microbial species, labor to safeguard cutaneous homeostasis and epithelial barrier function, namely, vitamin K, B12, butyrate and propionate. It does not spring a surprise to cognize in number of gastrointestinal disorders, cutaneous manifestations are prominent such as celiac disease with its dermatitis herpetiform or food allergies found in atopic dermatitis and psoriasis. Equally striking, acne patients show less diversity of gut microbiome with decreased level of Firmicutes and more abundance of bacteroids, a finding commensurate with amelioration of the lesions with use of probiotics. IGF-1, a major regulator of sebaceous lipogenesis with a well-known contribution to pathology of acne vulgaris, is consumed by probiotic bacteria, in particular lactobacilus, resulting in less IGF-1 in fermented milk as opposed to skim milk. 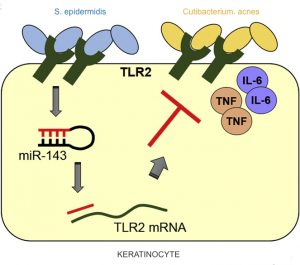 Innate antibacterial defense of the skin

Sapienic acid, 16: 1n-6, is the most abundant fatty acid of the human sebum has been found to curb gram positive bacterial growth while in combination with ethanol, in low concentration, appeared far more efficacious than mupirocin. One mechanism by which sebum enhances cutaneous immunity against microorganisms is by upregulation of antimicoribal peptides as it was suggested by activation of beta defensin-2 by sebaceous free fatty acids, oleic acid, palmitic acid and lauric acid.

The stratum corneum despite being desiccated is a viable organ with both the bricks, corneocytes, and the cement, the matrix, possessing bioactivity with a fine sensitivity to precept subtle nuances in its equilibrium. Differentiating keratinocytes release, by exocytosis of lamellar bodies, two groups of peptides, β-defensins and cathelicidines, whether constitutionally such as β-defensin-1, cathelicidine LL-37, or upon exposure to microbial agents, inflammation or pollution, o3 and production of reactive oxygen species, β-defensin-2 and S100A12. These peptides can disrupt the cellular membrane of the pathogens or penetrate the cells to derange the intracellular functions to protect the skin.

Atopic dermatitis patients, who show increased S. aureus skin infections, have been shown having suppressed activity or less concentration of beta-defensins and cathelicidines as compared to patients with psoriasis who express higher level of antimicrobial peptides and lower susceptibility to cutaneous infections. Interleukin-4 and interleukin-13 account for enhanced susceptibility to cutaneous pathogens, bacterial, fungal and viruses in atopic dermatitis in which depleted sphingosines were reported.

Skin care routine with respect to the skin microbiome

Recent scientificc literature confides in the skin microbiome in treatment of acne vulgaris and grows ample in evidence to provide comparison of skin care routines which respect the skin microbiome versus more harsh cleansing routines, primarily aimed to contain acne bacteria. This evidence is far more pronounced in acne patients in whom the skin bacteria sunbstantially compromised under various cleansing methods or antibiotic regimens and highlights the role of evidence based acne skin care in treatment of mild to moderate ance as well as maintenance treatment of severe or resistant acne.